Legend, icon, Queen. She is Cher and this is her show.

Six decades of stardom, over a hundred million records sold.

Goddess warrior of pop turned Hollywood royalty, the Grammy®, Oscar®, Emmy® and Golden Globe® award-winning Queen of re-invention has conquered it all. It’s now time to turn back time with this fiercely fabulous kick-ass new musical, from the writer of Jersey Boys, to honour the original Queen of sass – the inimitable Cher.

From a young kid with big dreams, to the dizzying heights of global stardom, The Cher Show tells the incredible story of Cher’s meteoric rise to fame, flying in the face of convention at every turn.

In a dazzling glitter fest of flamboyant glory, sparkling with Cher’s signature wit and style, you’ll be spinning in the aisles to the sounds of her biggest hits, including The Shoop Shoop Song, I Got You Babe, If I Could Turn Back Time, Strong Enough and Believe. A joyous party musical celebrating independence and individuality – be inspired by the greatest influencer of our time.

Cher the love and believe again!

Three Chers is better than one! Three West End stars play Cher as we span her iconic career: Millie O’Connell (SIX, RENT) as BABE, Danielle Steers (Bat Out of Hell, SIX) as LADY and the Olivier Award nominated Debbie Kurup (Prince of Egypt, The Bodyguard) as the ultimate diva, STAR.

“All of us invent ourselves. Some of us just have more imagination than others”
CHER 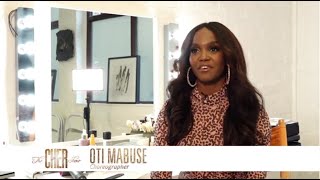 Afternoon Tea with a side of Cher

We’re teaming up with the Fitzwilliam Hotel this May to Cher the love of iconic afternoons in the City!

Our amazing pre-theatre package offers you the opportunity to enjoy a delicious Afternoon Tea including a glass of Prosecco at the luxurious Fitzwilliam Hotel and take in a matinee performance of the stunning new musical The Cher Show from the best seats in the house.

Usually, £35.00 per person, pre-book this package at a reduced price of just £25.00 per person plus receive a price band I ticket for £39.50. Enjoy a selection of seasonal delights with freshly baked scones, an array of homemade cakes and mouth-watering pastries in exquisite five-star surroundings. For changes to dining arrangements or notice of dietary requirements, please contact The Fitzwilliam Hotel on 028 9044 2080.

Become a Friend
Running time:
2 hours 40 minutes
Age guidance:
12+
Please note:
Cher will not be appearing as part of this production.