An Irish Homecoming for Dancer By Diane Parkes 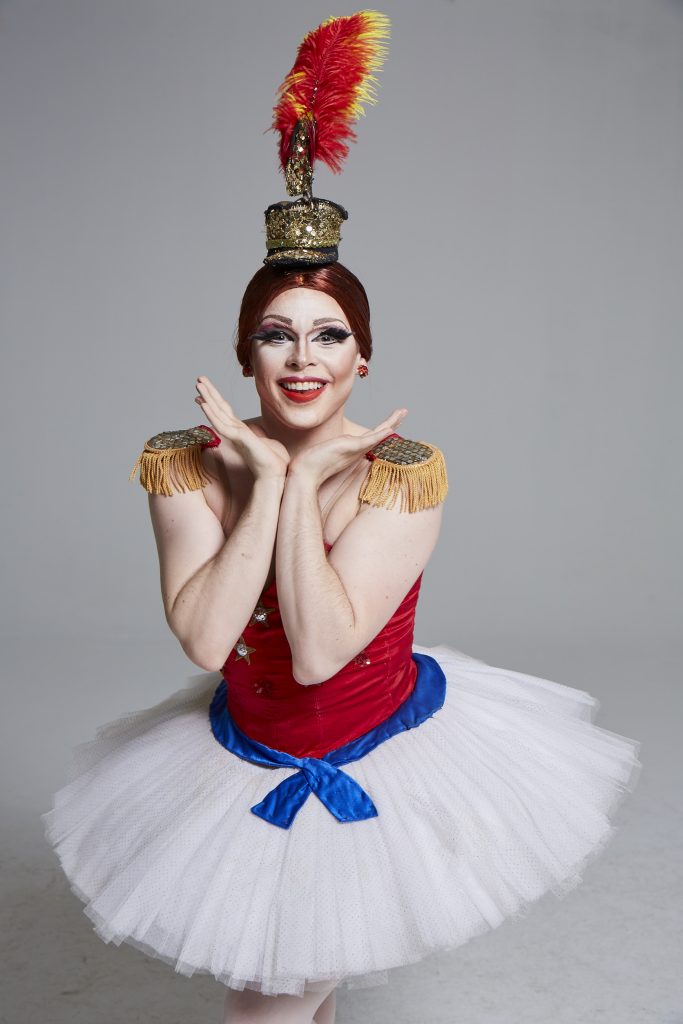 When dance company Les Ballets Trockadero de Monte Carlo come to Belfast and Dublin this autumn, it will be an Irish home-coming for one dancer.
Jack Furlong spent most of his childhood on the West Coast of Ireland and is really excited at the thought of dancing in his home country when the company perform at Dublin’s Bord Gais Energy Theatre on October 9-10 and Belfast Grand Opera House on November 2-3.

Although he’s toured the UK before, this will be Jack’s first performances in Belfast or Dublin – and he’s ensuring friends and family are packing out the auditoriums.
Jack was born in the United States of America, grew up in County Leitrim and then returned to the USA to attend school as a teenager. Undertaking his dance training in New York City, he joined Les Ballets Trockadero, affectionately known as The Trocks, four years ago.

And although he’s toured the globe with dates across Europe, the Americas and the Far East since then, he’s yet to set his pointe shoes down in his home country.
“It’s the first time I’ve been to Ireland with the company,” says 28-year-old Jack. “The company has been to Belfast before but this is the first time they’ve been to Dublin.
“I was born in Boston which is where my father is from and my mom’s family is from Leitrim. As a child I was living in Leitrim so I spent my formative years with my cousins hanging out with horses out on the farm. Then I came to New York for school but during school holidays for four months a year I would go back to Ireland and spend it with my cousins.
“As a child I never thought anything of going back and forth between the two countries. As a kid it was just my home and so I went back to it. It’s just now as an adult that I realise it probably wasn’t that normal. I remember saying to an aunt once that she had such a great life living in Ireland and her saying ‘and what about living in Manhattan?’ and that didn’t seem such a big deal to me.”

Jack has kept up his transatlantic journeying despite the tough schedule of dancing and touring with The Trocks.
“I make sure I go home to Ireland every three to six months,” he says. “But I’ve never been for work so I’m really looking forward to this tour. It’s going to be a real family occasion – everyone from my family is going to be there in Dublin which is really exciting.

“Many of my friends live in Dublin now anyway so they’ll be coming. None of my friends have ever seen me perform before so it’s really great they can do that right in Dublin. And I’ve also got some family and friends in Belfast who will be seeing us there.

“I was last in Ireland in the spring and I was staying with some friends who live really close to the Bord Gais in Dublin and every day I would walk past the Bord Gais and it was really exciting to think ‘in a few months I’m going to be performing right there’.”

But Jack is the first to admit some of his friends and family may be a bit surprised when they see him on stage – because The Trocks is an all-male comedy ballet company where the dancers take on both the male and female roles. Founded in 1974, the company take classical ballet and blends it with humour and drag to create an entirely new dance show. Jake takes on two roles, the male Mikhail Mudkin and the female Guzella Verbitskaya, in a range of different ballets.

“My parents have seen me several times with the company, they come to the New York season and they have also started to plan their holidays around our schedule, so they know the company well,” says Jack. “I have other close family who are coming to see me but I’m not sure they know what they’re in for yet! I think they think they’re just coming to see ballet!
“They’re going to love it though of course. This company is the best company to see if you’ve never seen ballet before. Everyone likes to laugh – humour is universal. And also, whether it’s contemporary ballet or the classics, I think The Trocks are easier to understand. The storylines are still there whether it’s Swan Lake or Paquita but people can relate to something that’s comedic.”
They may be using humour as a mainstay of the performances but the company are all fully trained dancers – who are expected to carry on learning with The Trocks.
“We’re like any company in that we take class every day and we rehearse six or seven hours afterwards for six days a week,” explains Jack. “I’ve been dancing with them for four years now and sometimes I still see my colleagues and I think ‘wow, that’s fantastic’.
“I think one of the hardest things for us as dancers in the company is that we do all of it. We’re not just doing the male roles or the female roles so that can be quite tough physically – one moment I’m in my pointe shoes and then I have to pull them off and do double tours, a double turn in the air, or sometimes I’m still in my pointe shoes doing double tours – which is much harder than doing double tours in flat shoes!
“Of all the ballets I would say the most challenging is Swan Lake – it’s so hard! I think you get stronger with time but I don’t think it ever gets any easier. We have a few new dancers and you just have to say ‘Swan Lake doesn’t get any better.’ It’s one of our most popular ballets so we do it a lot – but it’s definitely the hardest.”
Jack trained at the Valentina Kozlova Dance Conservatory of New York, which is run by the former Bolshoi and New York City Ballet principal, Valentina Kozlova. And when a vacancy became available at Les Ballets Trockadero, he jumped at the chance. 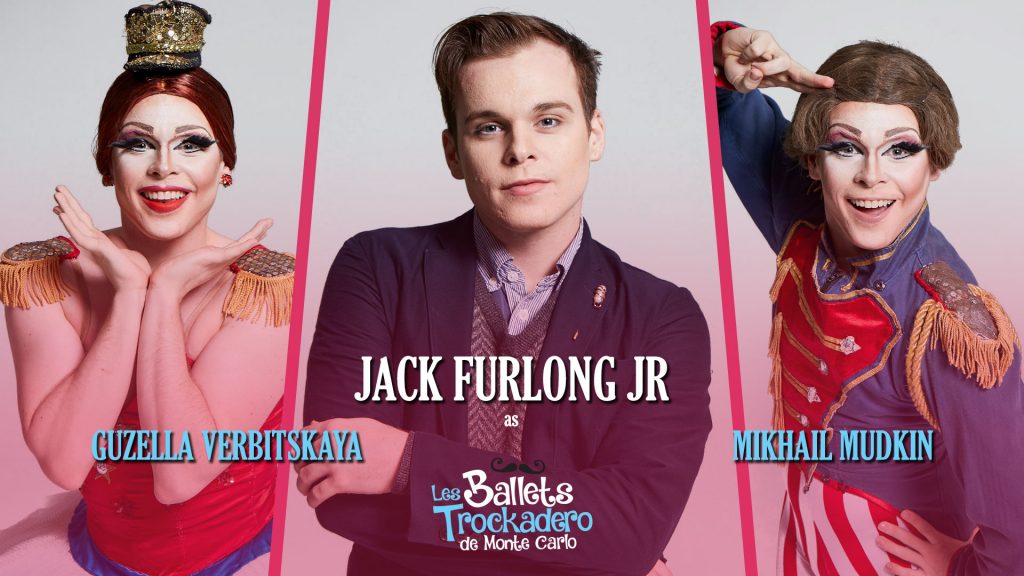 “I knew the company from when I was in school and then one of the dancers let me know there was an opening and I thought it would be a fun idea – and it clearly is! And then when I came to the company I realised what a great experience it is being part of The Trocks.”
And being with the company has taken him far and wide.

“We tour about 30-35 weeks a year,” Jack says. “In any one year you could be in 20 countries. We go to the most amazing places and the audiences are always brilliant. We don’t have a bad audience.
“But my favourite is definitely the UK. Irish people tend to travel a lot and a lot live in London and on the tour last time people were saying ‘Jack, you seem to have a friend in every city on this tour’ and I was saying ‘actually I do!’ and that was really nice.
“Everyone in the company is very international, that’s not unusual in the ballet world, so we’re used to company members having friends or family when we are visiting venues. It’s great if you have the time to get out and see your friends and family but there can be quite a lot to do on the day of a show so it’s not always possible. But in both Dublin and Belfast we have a day off there so hopefully I’ll find time to see more of them.”
Belfast and Dublin form part of a two-month tour presented by Dance Consortium, a group of 19 large theatres who work together to bring international dance companies to the UK and Ireland. The Trocks are bringing two different programmes with excerpts from Paquita, Swan Lake, La Esmeralda, Les Sylphides and La Trovatiara.
And Jack is already looking forward to the visit.
“I was on the last UK tour three years ago and the UK audiences are great. Every country is different in the way the audiences act and the UK audiences are always very excitable and very involved. That’s really nice for us on stage because it gives us more energy.
“We love being in the UK – we’re so excited to be going back. And now going to Ireland as well! There are no guys in the world as excited as we are to be coming to the UK and Dublin – or who will put on such fantastic shows.
“The audience is in for a treat. They will get an electric environment and they will see a lot of good quality dancing with a lot of laughs. And this tour is going to be really special for me – this Irish fella is on his way home, it’s going to be brilliant.”